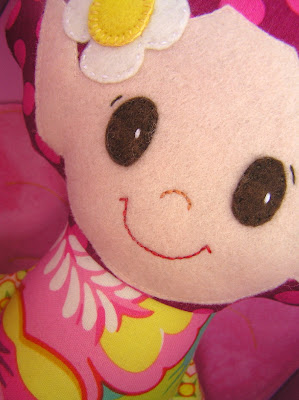 It seems like it's been absolutely eons since I put up a pixie to sell, well it has sort of, I know I haven't made one this year and I think the last ones were pressies for a couple of my neices at the end of last year. So yes, it's been a while since I last sold a pixie, but voila! Look there's one previewing up in the shop right now! Her name's Ivy, a name I would have loved for the bubba in my tum but it's a bit botanical and green and since my last bubba was Sage, I just can't do it. I also like Olive, but same story. Ivy will be going live tomorrow night at 8pm SA time. 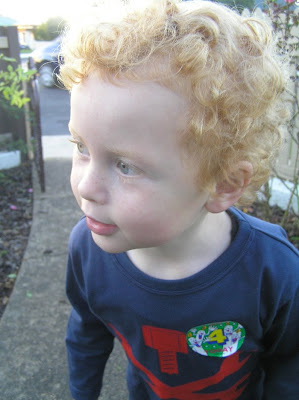 This week me marked the big #4 birthday for my little rednut mate, Asher. What a big boy he is now, 4! He had his first full day of kindy on his birthday, which was a bit full on for him, and I missed him terribly. We then went bowling (of which the little man just rocked) and out for tea followed by a very colourful rocket birthday cake. Unfortunately, I'm a bit of a dill and accidentally erased most of his birthday shots before uploading them, except for this one and this attractive smile. 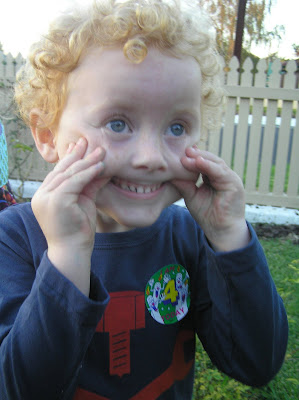 Oh and yes family if your looking, he's had a hair cut! Quite a bit I chopped off this time and I was soo nervous we'd lose those curls, but they're here to stay, hooray! He still gets called a girl though!
Posted by Megsie at 11:18 PM

Happy Birthday to your little man. And ooh does this mean bubba no 4 is a girl? With names like Ivy and Olive?

But bugger on the photos, maybe someone else in the family managed to grab some :)

not sure on the sex Lesley! But I've had 1 boy out of 4 births so it's a pretty good chance it will be another girl. I have a little boy who desperately wnats it to be a boy though.

Megsie
I'm a mumma to 4 sweet little pint-sized treasures and love to sew, draw and many other creative endeavours.

Promote Your Page Too